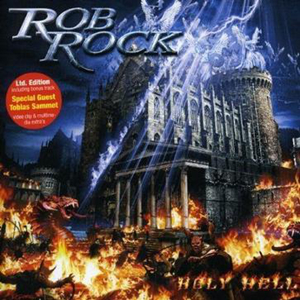 Rob Rock is a Christian metal singer and songwriter. He is best known for being the lead singer of the band Impellitteri until 2000. He is currently working in his solo career and has released four albums so far (“Rage of Creation”-2000, “Eyes of Eternity”-2003, “Holy Hell”-2005 and “Garden of Chaos”-2007)

Rob Rock started his career in 1983 when he and Chris Impellitteri joined VICE, a cover band. They released a successful demo and were together until 1985. In 1986, he joined musicians Tony MacAlpine (guitar), Tommy Aldridge (drums), and Rudy Sarzo (bass) in a project called M. A.R.S. Project Driver. The project received much critical praise, but the next year each member went a different way.

With different ways to follow, Rock decided to record an EP with Impellitteri called Relativity. However, he was already committed to another project called Joshua, so he could not continue with the band (at least for the moment.) After that, he worked on a series of projects (Angelica, Driver) which gave him knowledge of international musicians that would serve him well later.

In the early 1990s, he received a call from Chris Impellitteri to join his band again. He agreed and he went on a successful run with Impellitteri with albums: “Grin and Bear It”-1992, “Answer to the Master”-1994, “Screaming Symphony”-1996, “Eye of the Hurricane”-1998 and “Crunch”-2000, two EP`s and one live album. In 2000 he decided to pursue his own solo career and parted ways amicably. That same year, he released his first solo album called Rage of Creation. The album received much critical praise and Rock has gone on, releasing three more albums on the way.