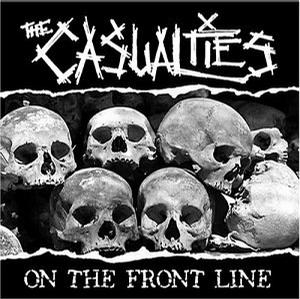 The Casualties formed in 1990 out of a desire to return to the heyday of punk, an era that hung on into the early ’80s and then started to fall by the wayside in favor of the very early grunge movement, as well as hair metal, synth pop, and new wave. But the band’s lineup was far from stable in the early days. The initial lineup consisted of singers Jorge Herrera and Colin, drummer Yureesh, guitarist Hank, and bassist Mark. Even this inaugural lineup was shaky, with Colin stepping out for several months to finish his education, and Rivits singer Rachel stepping in to take his place. During this period, the Casualties put together a demo. The following year, the core lineup consisted of Colin, Jorge, Yureesh, and Mark. The band added guitarist Fred when Hank dropped out, and went on to make an appearance on the compilation Benefit for Beer. Soon more changes were in the works, with new guitarist Fred heading off to school. C Squat’s Scott temporarily filled Fred’s shoes until he returned a short time later. During this period, guitarist Hank came and went a second time. Another guitarist, Steve, also played briefly with the group.

The Casualties stabilized long enough in the fall of 1991 to put together an EP, 40 Ounce Casualty. By the following year, the band was touring frequently and building up a fan base in their hometown of New York City. In 1993, however, more shakeups were in the works. Guitarist Fred and bassist Mark were out, and Jake Kolatis and Mike were in to take their respective places. The following year, the band appeared on another compilation, Pogo Attack, and put together a second EP, Drinking Is Our Way of Life. The four-track EP was never issued but later was incorporated into the band’s 1999 release, Early Years: 1990-1995. Stability remained elusive, and drummer Yureesh and singer Colin dropped out. Shawn stepped in to take Yureesh’s place. The group put together a third EP, A Fuckin’ Way of Life, in 1995, the same year that Rivits drummer Meggers (aka Mark Eggers) took Shawn’s place.

Temporarily settled in terms of their lineup, the Casualties traveled to London in 1996 for a performance on the stage of the Holidays in the Sun Festival. The following year, the band put out their first full-length album, For the Punx, and embarked on a tour where it supported the Varukers. Unfortunately, the lineup evolved again the following year, when the Krays’ bassist, Jon, took over when Mike dropped out. Jon stayed long enough to help out on the Underground Army album, but jumped ship during the band’s supporting tour across Europe in 1998. To take his place, the band recruited Dave Punk Core, who only stayed until 1999. With the addition of ex-Manix bassist Rick Lopez, the group (rounded out by Jorge Herrera, Jake Kolatis, and Meggers for those still following) started another tour. More tours of the U.S. and Europe followed in 2000 and 2001, along with the albums Who’s in Control?, Stay Out of Order, and Die Hards, the last marking their debut on Side One Dummy. On the Front Line appeared in February 2004; two years later, the Casualties preceded Under Attack’s late August release with a main stage slot on the Vans Warped Tour.