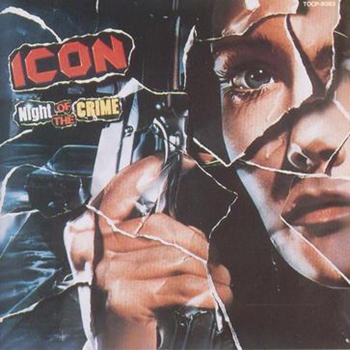 Icon is an American heavy metal/glam metal band that formed in 1981, disbanding in 1990.
Formation
Originally known as Schoolboys, ICON was formed in 1981, in Phoenix, Arizona by high school friends Dan Wexler (guitar), Stephen Clifford (vocals) and Tracy Wallach (bass). They were joined by David Henzerling (guitar) and John Covington (drums). In 1984, ICON was signed to Capitol Records. By this point, Henzerling and Covington had left the band and were replaced by John Aquilino (guitar) and Pat Dixon (drums).

Background
In 1984, Icon released their self-titled debut, Icon. In 1985, Night of the Crime was released. During the mixing of the album, vocalist Stephen Clifford decided to leave the band for personal reasons. Regrouping, the band released a local-only cassette called A More Perfect Union, featuring a polished pop-rock sound, a new singer (Jerry Harrison) and a keyboardist (Kevin Stoller). Although it was only released locally, it garnered enough attention to renew major-label interest in the group.

In 1989, Right Between the Eyes was released on Atlantic/Megaforce, with Jerry Harrison on vocals and Drew Bollman on second guitar. A video for “Taking My Breath Away” was played on MTV’S Headbangers’ Ball. Following the release of Right Between the Eyes and a supporting tour, which included David Lauser on drums (currently Sammy Hagar’s drummer), Icon disbanded. Singer Harrison recorded with a new project called Harlequin. The other band members continued to be involved in music projects; guitarist Dan Wexler in particular wrote and recorded with Alice Cooper (who had performed backing vocals on “Holy Man’s War” from Right Between The Eyes). In 1994, (An Even) More Perfect Union–an expanded version of A More Perfect Union, including tracks recorded for potential release on Right Between The Eyes–was released on CD.

2008 Reunion
In August 2008, ICON celebrated their reunion with a re-issue of a 1984 Bootleg Concert on DVD. Original members Wexler, Aquilino & Dixon along with former member Dave Henzerling and new singer Scott Hammons had plans to record new material potentially for a new album.

On November 29, 2008, ICON opened up for Tesla at the Dodge Theatre in their home town of Phoenix, AZ. They received a warm reception. Copies of their 1984 DVD were signed and sold and the band promised that new material was on the way. 93.3 KDKB, the local rock station, plugged ICON as a band they love yet rarely play.

In May 2009, singer Scott Hammons decided to pursue a solo career so he decided to leave the band and was replaced with former Adler’s Appetite vocalist Sheldon Tarsha. Previous plans to record new songs, possibly for a new album, still exist.

There is a possibility both the original self-titled album ‘ICON’ & ‘Night of the Crime’ being re-released in the near future.