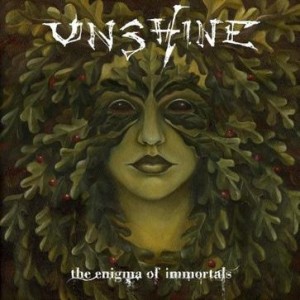 Despite of their yet short-time existence, Finnish druid metal quintette UNSHINE has hit the metal world like a clang of an iron-age hammer with their originally blended receipt of metal and (despite of their name) has become one of the brightest new stars in their globally metal-famed northern home country.

In the year 2004, the combat effectiveness of druidess beauty Susanna, one of the most recognizable and adored new female voices in metal, and her dedicated fellow bards was proved iron-clad as they fought off themselves a record deal and released during 2005 their debut album, Earth Magick, both in Europe and in North America. Even though the whole thing was self-recorded and produced, it still managed to cause exceptional fuss among the modern metal society.

Although the band has gained all kinds of attention, including invitation to European-wide pop-contest in Spain in the very beginning of their career and the recent, tenacious rumours of Susanna joining Finland’s main export product, Nightwish, the two and half years right after the debut album were dedicated totally to the creation of the follower: The Enigma Of Immortals.

While the composing an arranging of the album took whole two years, the recordings and mixing was done at uncompromising D-studio, Klaukkala, Finland between April and October, 2007. The album was mastered by top-rated Svante Forsbäck at Chartmakers, Helsinki, Finland.

The result embodies as a perfect-sounding and –produced album that defines the very essence of druid metal. A graceful monster, oozing with haunting folkish melodies and archetypal lyrical metaphors reaching to celtic world and beyond.

The Enigma Of Immortals is a thematic course through our past, from the deepest dark desolation and greediness of ancient rulers through the strangest old world clairvoyants and ultimately to the greenest celebration of the innocent life of the smallest nature dwellers.

Forget your dragons, fake witches and swordmen, the genuine darkness and beauty origins from a real well beneath our minds:

“Druids had the gift and the responsibility of interpreting the nature and the universal mysteries to their folks. They literally walked between the worlds. We feel that this is our destiny, too. Imagine us as modern metal bards”, describes Harri, the band’s main composer, with a bit of self-irony in his smile.